FISL12 -- Open Source show with Music and Dancing in Brazil.

Not so long ago, it was easy to judge a technical conference by the number of small screwdrivers1 you picked up as swag from the show. Open source shows usually have similar elements in common with each other like someone in a penguin costume, at least one guy in a kilt2, piles of Linux distro CDROMs, and bonus points for either Mad Dog or Linus in person. Last week I was in Porto Alegre, Brazil for FISL where they had all that plus folk songs and dancing3. They really raised the bar for open source shows. 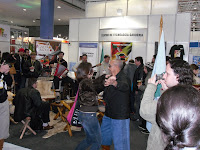 The MySQL Community is large, vibrant, and inquisitive. Davi Arnaut, one of our developers who lives in the North of Brazil, presented on MySQL 5.5 and 5.6 to a full room. I was in the Oracle booth answering questions about new features, workbench and the Enterprise edition. During the four days, there was a constant flow to the booth and we got to meet many developer and students who rely on MySQL. 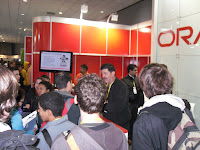 I enjoyed meeting all the 'MySQ-elle' users at FISL.

And next year I will have more MySQL swag for the attendees. The stickers and t-shirts were popular and went quickly.

Email ThisBlogThis!Share to TwitterShare to FacebookShare to Pinterest
Labels: FISL